For a couple of years, one of the other Girl Scout leaders here has brought up the idea of an Outdoor Skills camp for “older” girls. For the past couple of years, I have suggested that we let these “older” girls cook at camp — more than putting meat & veggies into tin foil for someone else to put on hot coals. This past weekend, both plans came to fruition.

8 girls (going into 4th, 6th & 7th grades) and 4 adults gathered at a South Dakota state park to learn some outdoor skills & have some fun. The other leader taught them how to tie several different knots (which apparently my Maggie is fairly adept at), proper tent set up (and tear down), how to build a fire (tho they only practiced & observed me actually start the fire), they talked about wildlife & played fun Girl Scout games. We also took a night hike with the state park naturalist — no flashlights and no moon. It was cloudy during the hike but clear when Maggie & I went to the bathroom later — the star light was magnificent & the Milky Way so awesome to behold.

For me, I stepped up to volunteer as camp cook. I knew I couldn’t complain about not giving the girls an opportunity to cook & then not step up to the challenge.

For the burners, we used cat food cans. For the stoves we used coffee cans (not sure what they were made of but they got hot FAST). The other leader cut old cookie case boxes into strips to fit into the cat food cans. The girls fit the strips into the cans in circles. We then melted crayons & wax and poured into the cans. The adults put holes into the coffee cans. We opted for the punched holes & would put the coffee cans on top of the burners for the girls rather than cutting a doorway & trying to push a lit burner in.

It was super windy & seemed to take forever to get them to light. Once it did, it did heat up fast! The girls then got their sandwiches ready for cooking. They loved that they could cook their sandwich as they liked. The camp site didn’t have a good place on the ground to cook, so we opted for the metal picnic table. Next time I’d probably put aluminum foil down to better protect the table.

The rest of the meals were dutch oven recipes that I thought the girls would like. I added them to a different post, to keep this one somewhat short. A couple of lessons learned to pass along: 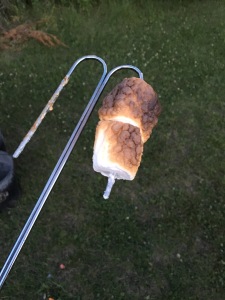 We’ve got some great t-shirts, notebooks, mugs, just about anything you can think of! All proceeds go to a different charity each month. Click here to purchase!